Part of the history and lore of Round Rock involves the Chisholm Trail, as evidenced by the naming of the major thoroughfare through Old Town, Chisholm Trail Drive. 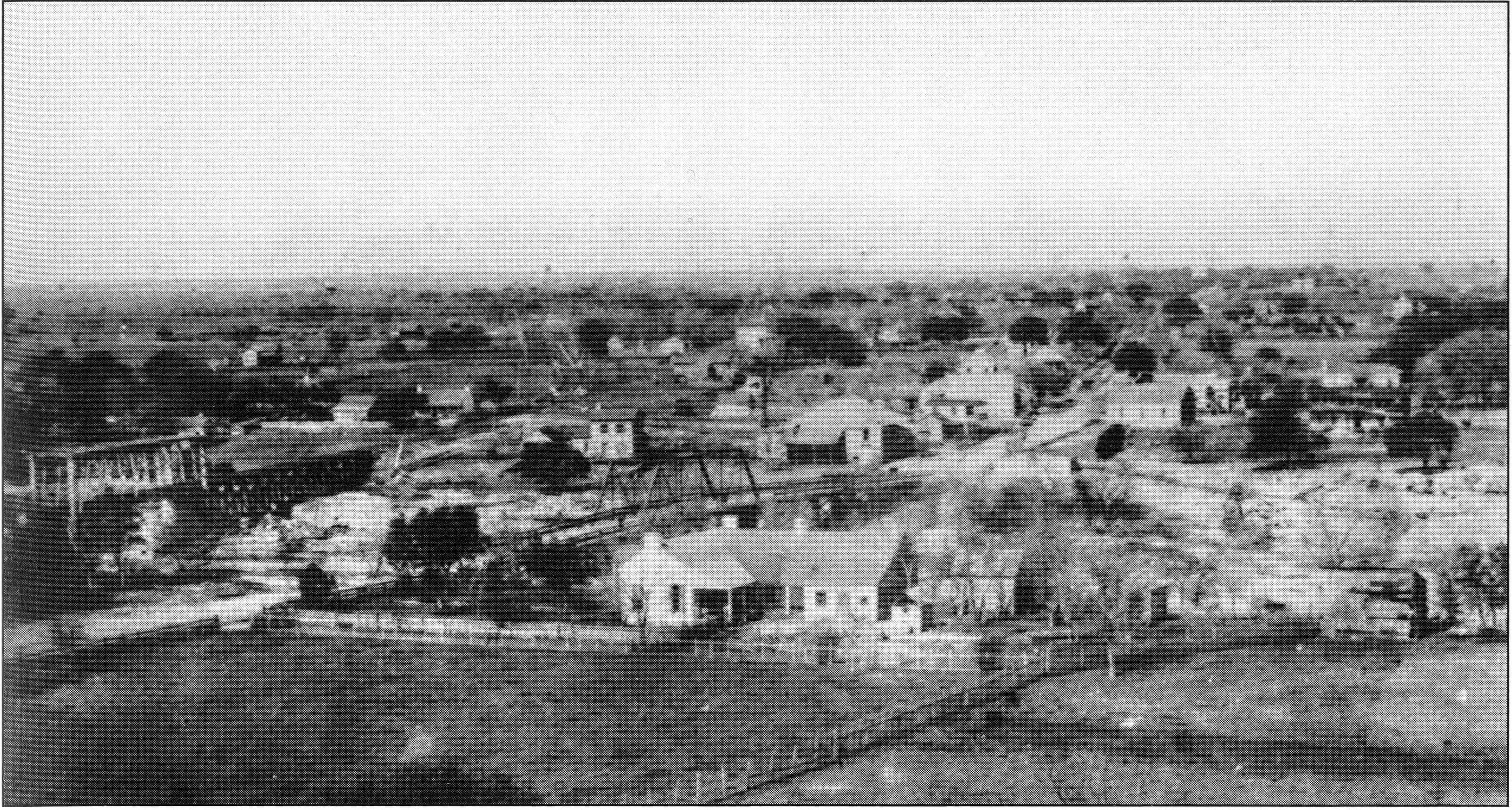 View of old Round Rock circa 1890 (view from the top of the Round Rock Institute, which was built in 1883 and burned down in 1913; the railroad bridge on the far left was washed out in 1900). Photo: Martin Parker

Jesse Chisholm laid out his trail in 1865; starting on the Canadian River near present day Yukon, Oklahoma, the trail proceeded north to Wichita, Kansas.  The original purpose of the trail was to provide a way to freight goods north in order to trade with the Indians.  In 1866, Jesse took a wagon train of goods plus 250 head of cattle over the same trail and the Chisholm Trail was born (Scarbrough 198).  Being that the actual Chisholm Trail began far north of Round Rock and Williamson County, the branch of the trail that went through Round Rock was not actually part of the Chisholm Trail but merely a feeder; however, over the years, by common practice, all trails that fed into the Chisholm Trail came to be called the Chisholm Trail and had as their objective the same purpose: the transportation of cattle from the grazing lands in the Southwest to the markets in the Midwest.  Chisholm’s trail was popular with subsequent traildrivers because it purposely avoided hazardous river crossings and stuck to areas that provided adequate grazing and water for the cattle (DiGesualdo and Thompson 28). Route of the Chisholm Trail through Central Texas

The impetus behind the trail drives was economic.  At the end of the Civil War, the market of cattle was glutted in Texas while demand was high in the northern states.  Cattle in Texas were valued at about three to four dollars a head while they could be sold in the North for $30 to $40 a piece (Gordon 12).  Thus, the trouble of conducting a trail drive was warranted by the economic return.

Before the Civil War some Texas cattle had been driven up to Kansas and Missouri, but Williamson County cattle were not included in any of these early drives (Scarbrough 206).  The first drive to originate from Williamson County occurred in 1867, when 35,000 cattle were driven north to the market at Abilene, Kansas.  The cattle for this drive was assembled along the banks of Brushy Creek by R.M. Overstreet, a Presbyterian minister, A.J. Hanna and a Mr. Julin (Ibid. 201).

After 1867, the herds continued to move through the Round Rock area on their way to northern markets for approximately twelve years.  The number of cattle composing each drive varied from as few as several hundred up to 40,000 and, depending on the size of the herd, took either a couple of hours or as long as several days to pass through town.  Round Rock citizens, especially children, would often gather to watch the herds cross Brushy Creek at the round rock (DiGesualdo and Thompson 26-30).  The herds that passed by Round Rock took one of several routes.  Some crossed Brushy Creek east of town near Kenney Fort, while others passed west of town near Bagdad.  Many herds crossed Brushy Creek at the round rock and were then herded up the main street of Old Town (Scarbrough 197).

The trail drives came to an end due to the invention of barbed wire in 1873, the spread of railroads, and the outbreak of Texas Fever– a disease that was transmitted to cattle by ticks and fleas– and the subsequent quarantine against Texas cattle from entering other states.  Round Rock and Williamson County were unaffected by these factors until the early 1880s.  At this time, barbed wire fences began to close the open prairie and cattle were driven east to the railroad at Taylor where they were then shipped by train to the markets in the north.  The construction of fences also prevented cattle from reaching natural watering places such as streams.  Windmills came into use in the Round Rock area and the Williamson County cattle industry turned from one of large herds to small scale cattle ownership by numerous owners who kept their cattle pinned on their own land and provided water from underground sources.  Large scale cattle operations in the State of Texas moved to the West, and the cattle industry declined in importance in Williamson County (Scarbrough 199-200).

Gordon, Clarence.  Report on Cattle, Sheep, and Swine, Supplementary to Enumeration of Livestock on Farms in 1880. Department of the Interior, Census Office, Government Printing Office: 1883.