The following article was written by Angelique Meyers, Public Information Officer for the Police Department, and published in by the Department of Justice’s e-newsletter, Community Policing Dispatch.

Law enforcement agencies across the country have been under high criticism from the public for negative and sometimes fatal outcomes when police encounter dogs in the community. In a few previous incidents, officers with the Round Rock [Texas] Police Department have been involved in fatal dog shootings, even after completing the online COPS Office Dog Encounters Training. In response, Round Rock Police Department leadership decided to take action and implement new training and tools.

The Round Rock Police Department, in collaboration with the Animal Control Unit, created a new community-based initiative called B.A.R.K.: Be Aware of Residential K9s. The B.A.R.K. Alert Program is designed to improve officer safety and empower citizens by alerting first responders to the presence of animals at a residence. Community members voluntarily register their pets and service animals with the program. Officers are forewarned of the possibility of an animal encounter, and are able to bring the necessary equipment to handle that encounter in a way that is safe for both the officer and the animal.  The program is free for residents and all owners, but especially those with large-breed dogs, are   encouraged to participate.

Advertising the B.A.R.K. program was initially challenging, and citizen registration was lower than expected. However, the program was successfully promoted by local vaccination clinics, the Williamson County Animal Shelter, and pet-related businesses in partnership with the Police Department. A B.A.R.K postcard was distributed to residents that resulted in a significant increase in registrations, and the department’s public information specialist was also able to raise awareness for the program through social media. Currently, there are 945 Dog on Site registrations at residences in Round Rock, and the program is expected to keep growing as information spreads. 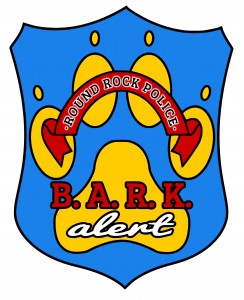 Residents with ‘Dog on Site’ registrations are given BARK Alert stickers, which alert officers and has the added benefit of deterring burglaries. The cost of printing the alert stickers was minimal and has the added benefit of improved trust between police and the community.  Further, the B.A.R.K program has had a dynamic impact on the community and on the police department’s public relationships. It has provided the department opportunities to speak with pet owners about animal and officer safety, as well as increased the police department’s support from the local businesses, clinics, and shelters that advertise the program.

In addition to the community-based B.A.R.K program, Round Rock sworn police personnel have completed over 700 total training hours in dealing with aggressive animals, including interactive training with canine expert Jim Osorio. This ongoing training reminds officers to seek out signs of aggression for animals.  Officers now use treats and other tactics to interact with animals in the field and are generally able to deescalate situations. Officers have also been issued and trained on animal catchpoles, a tool that allows officers to humanely restrain an aggressive animal. Previously only animal control officers had this tool. These actions were implemented prior to the Texas state mandate for Texas law enforcement officers to undergo canine encounters training.

The result of these changes was recognized when a local citizen sent a letter to the department commending an officer for not shooting his dog even though the dog bit the officer. Officer Randall Frederick’s actions in that encounter were honored by the National Law Enforcement Center on Animal Abuse in 2015.

One neighboring police department has already implemented the B.A.R.K. program in its community, under a different name and many more departments can benefit from replicating either the program or any of its component parts: registration of household animals, the now-mandated training, and the use of catchpoles by police officers. Together, these changes increase public and officer safety and improve community relations—changes law enforcement agencies across the county would find highly valuable.

A simple google search of the terms “police dog shooting” will reveal the nationwide extent of the issue of fatal dog shootings. We truly believe that any department willing to take action on this issue can experience a noticeable change in how their officers interact with animals during calls for service.

The Round Rock Police Department will continue to explore new ideas and advertise at special events to increase participation. The program is expected to continually grow as the information reaches more residents in the City of Round Rock.