The Round Rock Express, in conjunction with the Pacific Coast League, International League and Minor League Baseball are proud to announce that the Triple-A All-Star Game, presented by Dell Technologies, will be held at Dell Diamond in the City of Round Rock for the first time in 2021.

“We could not be more excited to bring the Triple-A All-Star Game to Dell Diamond in 2021,” Express President Chris Almendarez said. “This is one of the biggest baseball-related events to take place in Round Rock’s storied history and we’re anxious to get to show off our great city and ballpark to our friends across Minor League Baseball.”

The 34th annual Triple-A All-Star Game at Dell Diamond is set for mid-July 2021. All-Star Week festivities include the Triple-A Home Run Derby as well as an All-Star luncheon. Dates, times and other All-Star-related events will be announced as the summer of 2021 draws nearer.

“The Pacific Coast League is extremely pleased to have voted Round Rock to host the 2021 Triple-A All-Star Game,” Pacific Coast League President Branch Rickey said. “This has become a summer highlight for both leagues and an opportunity to show off our premier players. Our television coverage gives national display to one of our great Triple-A ballparks, adding a crowning luster regardless of which league wins the game.”

The Triple-A All-Star Game pits the brightest stars from the Pacific Coast League up against the best players in the International League in a nine-inning contest to determine Triple-A superiority. Blending the PCL and IL into a single game gives baseball fans the opportunity to see players on the other side of Triple-A Baseball that they wouldn’t normally get to see during the course of baseball season.

“The ownership and operation of the Round Rock Express have a fabulous reputation throughout the entire professional baseball industry, but most of us in the International League have never visited Dell Diamond,” International League President Randy Mobley said. “My colleagues and I look forward to seeing just how the team and city inject local flavor into the All-Star Game and associated events. Fans in the greater Austin area are in for quite a treat.”

“The Round Rock Express have been one of the elite franchises in all of Minor League Baseball for many years, so it is only fitting that they were selected to host the 2021 Triple-A All-Star Game. I know they will host a wonderful and entertaining event,” Minor League Baseball President Pat O’Conner said.

As the proud stadium naming rights partner since day one, Dell Technologies will serve as the title sponsor for the 2021 Triple-A All-Star Game at Dell Diamond. Celebrating their 25th anniversary in the City of Round Rock, Dell Technologies has become synonymous with not only the Express, but the entire Round Rock community.

“As the Sports Capital of Texas, we are honored and excited to partner with the Express to host fans and players of the best teams in Triple-A Baseball,” Round Rock Mayor Craig Morgan said. “With the opening of Kalahari Resorts and Conventions on the horizon, Round Rock looks forward to hosting an All-Star experience to remember. Go Round Rock!”

The Express unveiled the logo for the event during a press conference at Dell Diamond on July 25. Designed by Ryan Foose of Fooser Sports Design, the creative mind behind the Round Rock Chupacabras branding, the 2021 Triple-A All-Star Game logo is uniquely Texan. Built around the iconic Lone Star for which the State of Texas is known, the logo is adorned at the top by a pair of bluebonnets while Texas flags fly proudly alongside.

The Round Rock water tower is also displayed at the highest point of the star, a nod to one of the City of Round Rock’s most prominent features. Additional logos and branding will be unveiled in the near future.

“We are so proud to call Round Rock home and to bring the Triple-A All-Star Game to Dell Diamond in 2021, and we wanted the look and feel of this event to match that excitement,” Express General Manager Tim Jackson said. “We can’t wait for the baseball world to get to share in all that Round Rock has to offer.”

Round Rock Express season members will have the first opportunity to secure tickets to the 2021 Triple-A All-Star Game festivities. Additional ticketing information regarding the All-Star Game and accompanying events will be announced in the near future. 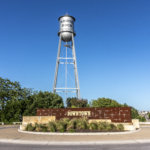 Downtown roundabout sign to be temporarily removed for repairs