Today’s blog talks about what is the most important aspects of irrigation, but probably the most overlooked.

I’m referring to efficient scheduling of the irrigation system, based on the amount of sunlight in your yard, the sprinkler head type, and to a lesser degree, the plant types in your yard.

These three items require some consideration when entering in how many minutes you are setting each station for—there’s no point in having specialized heads, a shady yard, and native plants if everything is going to run for 20 minutes no matter what it is.  Unfortunately, I see that happen a lot.  Then folks wonder why areas are brown or plants are dying.  (There’s also the consideration of soil type and soil depth; we’re not going to get into that here, but it certainly does play a huge role in irrigation amounts.) It may seem obvious, but I’m going to come out and say it anyway—shady areas require less water than sunny areas.  If you have good tree coverage and areas of the yard receive less than 6 hours of direct sunlight daily, that’s considered a shady yard.  The narrow, sides of our houses qualify for this designation.  Full sun areas need more water, usually; this is dependent on what the plant type is here.   So, when entering time into your controller, you know that the times should be higher for the sunny spots and lower for the shady ones.

As I’ve talked about in an earlier blog, there are two main sprinkler head types—rotor and spray.  There is also drip irrigation, which technically has no head at all!  Rotor heads, if you remember, rotate, so they are not watering the same area the entire time they are running, therefore, they need to run for a longer period of time than spray heads.  The minimum I typically recommend running them for is 15 minutes, and that’s in a shady area.  Usually between 25-35 minutes is a good time for sunnier areas with turfgrass.

Since spray heads are stationary, they pop-up and stay watering the same spot the entire time, they can run for a shorter amount of time than rotors.  I usually recommend between 6 -15 minutes for those stations, depending on the plant material and amount of sunlight, with the 15 minutes being for areas in full sun and turfgrass.

Drip irrigation is different.  Drip typically emits water very slowly, very minimally, so it oftentimes needs to run for longer periods—30 minutes at minimum or much longer in many cases.  I caution you to know how many gallons per minute your drip is using before you just set it for an hour.  I’ve seen drip that was using 20 gallons per minute, which is just as much as “traditional” spray zones!  Unfortunately it caused very high water usage at the property before it was discovered.

Landscape material is the last component of the irrigation scheduling trifecta.  Landscape could include turfgrass, trees, shrubs, groundcovers, perennials, flower beds, annuals, natural areas (like tree motts), bare ground, rocks, and I’m sure many other things.  It may be obvious as well, but it does need to be said—areas with no vegetation really don’t need to be watered.  The bare ground will just be muddy.  Same goes for rocky paths, they don’t grow.  Mulched areas don’t grow.  Driveways, sidewalks, patios, and decks don’t grow.  Pools don’t need to be filled by the sprinklers (I’ve seen plenty of sprinkler heads spraying directly into pools!).  Trees have usually been growing there longer than you’ve lived there, so they typically don’t need the extra water.

Native plants, established shrubs, or other established perennials do not, I repeat, do not need the same amount of water as the grass.  That’s why you’ve planted them—they are native!  They are made for our climate and weather conditions.  They will survive without being irrigated twice per week.  I can’t count how many times I see native plants being watered more than the grass.  It’s counter intuitive to the reason for using natives.  So, turn those stations off completely and just water when they look completely stressed out.  (I’ll get down from my soapbox now.) 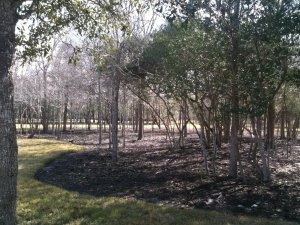 I like to recommend that people put the stations that are shrubs or plants on a different program than the grass stations and set them to water once every other week (if needed; if there’s been no rain).  If you want to keep the shrub stations on the same program as the rest of the yard, reduce the time on those stations.  I recommended between 6-8 minutes regardless of if it’s sun or shade.  They really just don’t need it.  Many natives do best in dry, hot conditions and die with too wet soil.

Turfgrass is a little tricky too.  A lot of Bermuda grass gets planted here, yet is watered just as much as any other grass (namely, St Augustine).  What I said about native plants is true about Bermuda too, you’re growing it because it’s drought tolerant: it doesn’t need to be watered as much.  Bermuda grass that’s overwatered tends to get a lot of weeds growing in it.  If you have Bermuda, I recommend cutting back the watering time to once per week.  Let it perform.  Yes, Bermuda goes dormant in times of drought, but it’s not dead.  It will green up when it rains or receives irrigation.  It looks better with rainwater though.  Also, Bermuda is not going to survive in shady areas, it will thin out and eventually die.  It requires full sun to really thrive.

St Augustine grass has such a bad reputation as a water hog, but I don’t buy into it.  It’s not setting the controller, the yard owners are!  St Augustine does great in areas with partial sun or partial shade.  I’ve seen it look really good in full sun too, with less water than you may think.  It will also thin out in full shade areas, but does better than most grasses.  Ideally, St Augustine should be kept at 3-4” tall when it’s being cut to keep the soil from drying out.  I water my St Augustine yard with rotor heads for 20 minutes and it’s looking great.

You may have picked up that there’s no exact time that works for every station or even every yard!  Irrigation systems unfortunately aren’t just a turn it on and forget it device.  It will take a little tweaking to determine how many minutes the yard will perform well on, and it may need to be changed every year as the trees grow and give out more shade.

I have some specific recommendations on runtimes; you can access it here.  It’s a good place to start, when setting your controller runtimes, then make changes from there if areas may need more or less water.