The process to consider assessing fees on new development to help fund road improvements continued Thursday, Sept. 13, as the Round Rock City Council held a second public hearing on roadway impact fees and released a draft ordinance. Another public hearing and vote on the ordinance is scheduled for Oct. 25.

An initial public hearing was held by the City Council Thursday, July 26, which followed a series of stakeholder meetings and a recommendation by the Capital Improvements Advisory Committee (CIAC), which held three public meetings on the proposed fees.

Roadway impact fees are one-time costs assessed to developers in order to improve roadway capacity. The funds can be used to help accommodate growth and serve the overall transportation system as allowed by state law. According to the 2017 Transportation Master Plan, more than $1.2 billion in new roadway capacity is needed to accommodate future growth in the City of Round Rock.

Roughly one quarter of cities in Texas, mostly in high-growth areas, have roadway impact fees. Central Texas cities Hutto, Taylor, Schertz, Cibolo and New Braunfels currently employ such fees, and the Cities of Austin and Buda are also currently studying roadway impact fees. The City of Round Rock has used impact fees allowed by Chapter 395 of the Texas Local Government Code since 1989 for water and wastewater projects.

“With impact fees, we would have the flexibility to use that funding to immediately create relief in the region,” Transportation Director Gary Hudder said.

The City currently negotiates site-specific improvements with developers, such as adding deceleration lanes, or contributions to intersection improvements including traffic signals, based on a case-by-case traffic impact analysis. But not all developments require this analysis as part of the planning and development process.

“Currently, in the case of multiple strip developments, someone who develops on the front end might not require a contribution, based on a traffic impact analysis. However, the next adjacent development could trip the trigger for necessary improvements, thereby absorbing the full burden for the entire area.” Hudder said. “Traffic impact fees would allow us to have a more fair process to assess proportional developer contributions to City infrastructure throughout the full development process.” 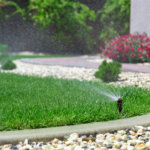 Fireworks are illegal in Round Rock